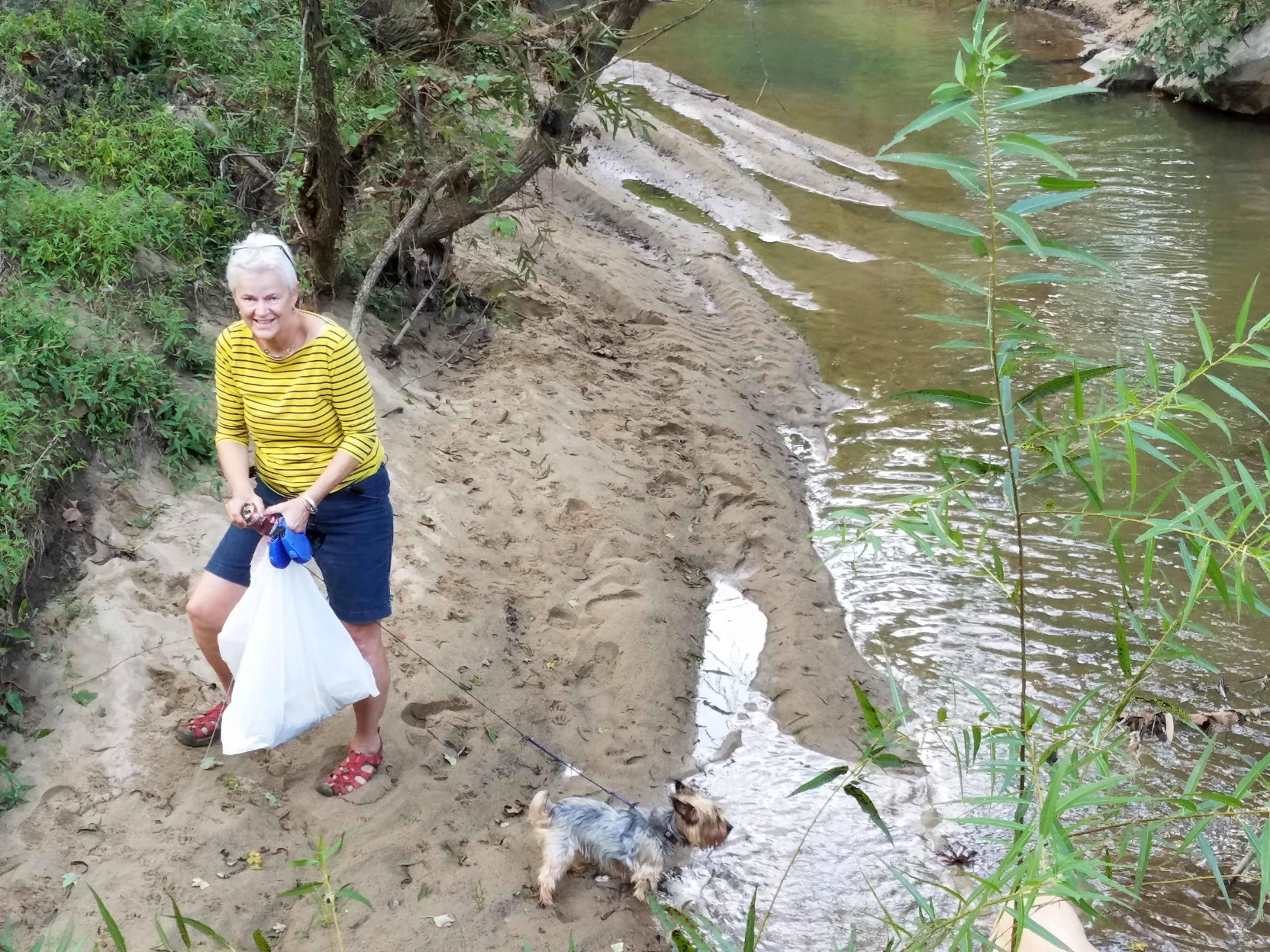 Sioux Watson, a resident of the Forest Hills neighborhood for 33 years, was nominated and selected due to her enthusiasm and dedication to Forest Hills and Durham. As she lives right on the park and walks her dogs down there daily, she see first hand everyday details of what is going on in the city owned Forest Hills Park. It is a busy park, much loved and used by citizens seven days of the week.

Sioux is often first on the scene- whether as the first to put on her hip waders and pick up the trash in the creek, report a tree down or as the first to report a neighborhood power outage to Duke Energy. She also cares for three or a dozen or so bald cypress trees lining the street she lives on, part of a neighborhood volunteer program, setting a high bar for the rest of the volunteers--neighbors say her trees are always the most weeded and cleared!

She also welcomes new neighbors and connects them with the rest of the neighborhood via “Neighborhood Watch lists” with everyone’s name and phone number in the immediate neighborhood on her side of the park. Sioux’s easy-going spirit and friendly face makes the neighborhood a cleaner, safer and more engaged community.

The Forest Hills Neighborhood Association (FHNA) is an engaged neighborhood- online and in person. The neighborhood listserv ([email protected]) is open, active and informative, passing along breaking news like missing or found pets. From community cleanups-sponsored by the FHNA, Keep Durham Beautiful and Durham Parks and Recreation- to the FHNA bi-annual potlucks or the annual Turkey Trot, there are many opportunities to meet new neighbors and catch up with old ones.

The neighbors also come together to support issues important to its residents. For Instance in 2008, FHNA resident and civic leader Brenda Brodie helped lead a movement to pass an ordinance to allow backyard chickens in city limits, hundreds turned out to attend City Council meetings and public hearings in support, via the FHNA and other Durham neighborhood listservs and the measure passed.

The FHNA serves as a “little watch dog for the Park,” always seeking to make the park better for all Durham residents.  The FHNA board of directors spearheaded one of the first city park’s recycling programs in a non-staffed park-all run by volunteers. They host workdays to get rid of invasive plant species growing in the Third Fork Creek bed which runs the length of the park. Thanks to Forest Hills’s regular clean-up days, Third Fork Creek water quality has improved and fish, beavers and crayfish have returned. Neighbors also care about aesthetics in the park, and raise money for landscaping and maintenance for many flower beds and push for creative solutions for maintenance issues such as replacing a pedestrian bridge with a natural (wooden) bridge instead of a concrete structure.

Sioux keeps pressing for a cleaner creek and a cleaner park. Her “long obsession about litter” was influenced by her father who also had a lifetime obsession, and continues today. She constantly picks up trash in and around Forest Hills Park- under the beaver dams, right after a big rain (the park is also a flood plain) by the bald cypress trees, and in and alongside the creek.

She also acknowledges the heavy use of the large green areas in the park and acknowledges the dire need for more Durham recreational spaces, such as more flat green parks for soccer, Frisbee and other sports fields.

1. Get a dog! By walking her dog’s everyday around her neighborhood, Sioux has met many neighbors and maintains an awareness and keen knowledge of her neighborhood. Also, bring poop bags or use ones on offer by the Parks & Recreation department in the park, and be sure to throw them away in one of the many trashcans places throughout the park.

2. Meet the new neighbors. Sioux welcomes new residents and encourages others to do the same.

3. Get the kids involved. Sioux believes it is important for families to get their kids involved in volunteerism and community activities early. One such opportunity is the Children’s Forest Hills Garden Club, for boys and girls, recently started by the FH Garden Club.

4. Get involved with community events. There are so many great events in Durham to support. For example, Sioux hosts home cooked dinners for visiting dance troupes performing at the American Dance Festival each summer. “You’ll meet the coolest people from all over the world,” she says.

5. Volunteer for parks- “There’s so much to be done. One person can have such an impact.”

6. Gather around a focal point- When you are trying to rally your neighborhood, find a mutual focus. In Forest Hills, so many come together around the Park and Creek.