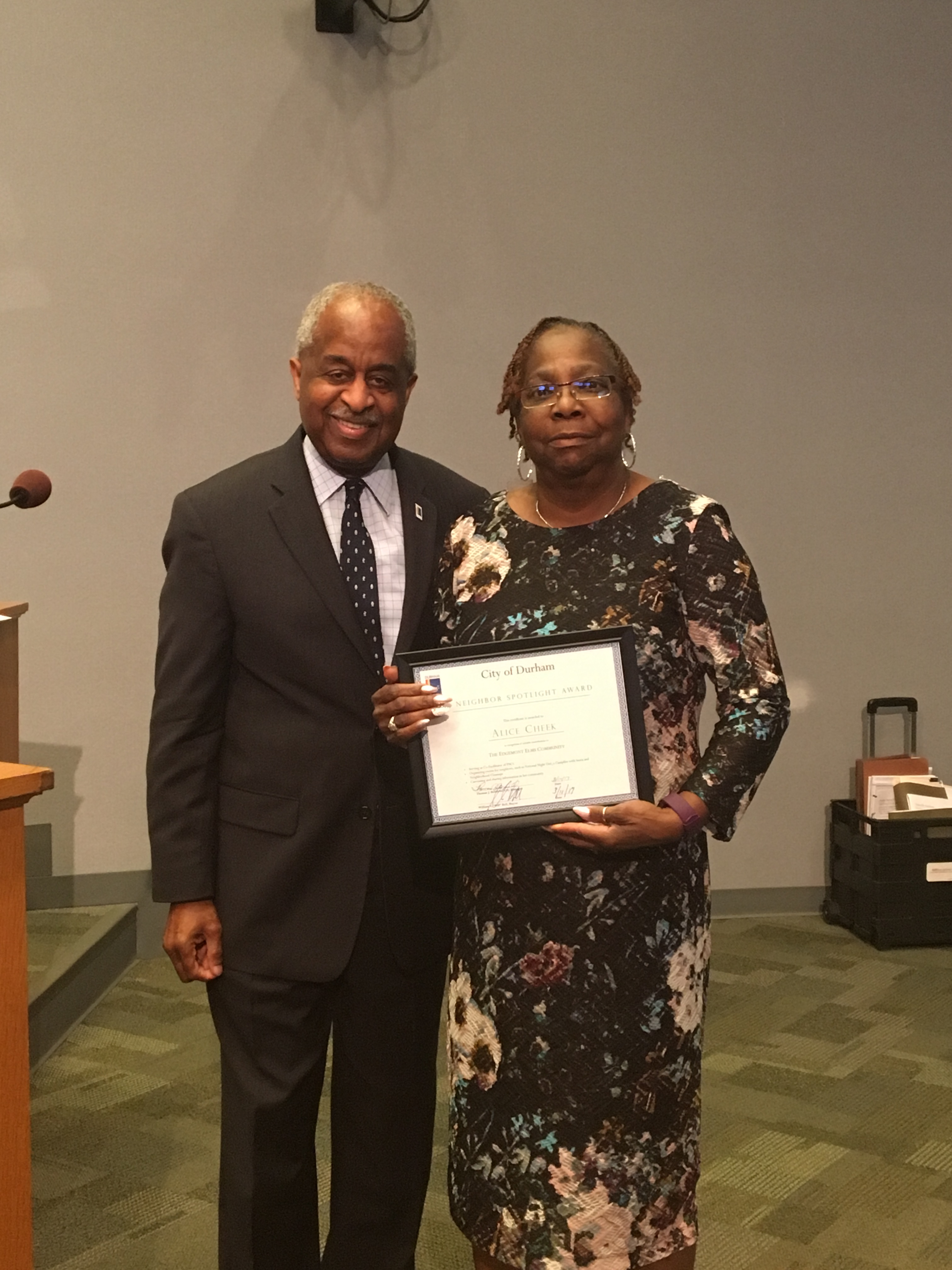 What is the name of your neighborhood?

Tell us about your neighborhood.

Edgemont was established around the Durham Hosiery Mills and the Golden Belt Manufacturing Company and the mill named the community, Edgemont.   Since then the Durham Hosiery Mill has become senior apartments and Golden Belt has become residential, business and artist studios.  Also the Durham Housing Authority built townhomes called Edgemont Elms and there is Calvert Place.   Edgemont just has a lot of history; my neighborhood was part of the reconstruction phase that took place in the 1990’s.  Now the neighborhood has become very diverse with a combination of young and old.   The neighborhood is kind of far from things going on Downtown but I hope that the new police headquarters being built nearby will help to bring more people to our side of town.  The more people who come for lunch and shopping the less people we’ll have hanging out with nothing to do and getting into trouble and that’s what we want.

What successes have your neighborhood and community had?

This past year Parks and Recreation, the Police Department, PAC Five (Partners Against Crime) and Neighborhood Improvement Services partnered to do Campfire with Santa.  The event was a huge success in the community. Families and children enjoyed taking pictures with Santa and eating s’mores around the campfire. For most of the children, this was the first time seeing Santa.  I want to thank Community Resource Officer Steve Hall for being Santa and Officer Charles Strickland, Jr. for being Santa’s helper/elf. We hope to make this an annual event.

What are some concerns that you still have in your neighborhood?

My main concern is violent crime.  Hardly a week goes by that I don’t hear gun shots in the area. Recently, the gunfire was way too close.  Some residents have lived here a long time but they’re afraid.  Some are leaving. People shouldn’t be afraid in their homes. No one is going to drive me out of my house, but I know why they’re afraid. The police have been paying extra attention to our neighborhood, but we still got a long way to go.

What advice would you give to other community members?

Please get involved in the community - be the solution and not the problem. Residents can come to the PAC 5 (Partners Against Crime) meetings. The PAC 5 meetings will now be held in Neighborhood Improvement Services Department conference room at Golden Belt so it should be easy for them to come.  The address is 807 E Main Street in building two on the third floor.   At the PAC 5 meetings you can voice your concerns, issues and questions. Police officers are there as well as other City departments.

Do you have any upcoming opportunities for other people to get involved?

Yes, through Parks and Recreation Edgemont Elm Park is getting new playground equipment and facelift. Parks and Recreation will be hosting a community design day in the park sometime soon and I would like the community to get involved with the park restructuring. Also, on Saturday, April 8th we are having an Edgemont Clean-Up Day that will consist of bulky item and litter pick-up. I will be passing out flyers to my neighborhood about the clean-up.