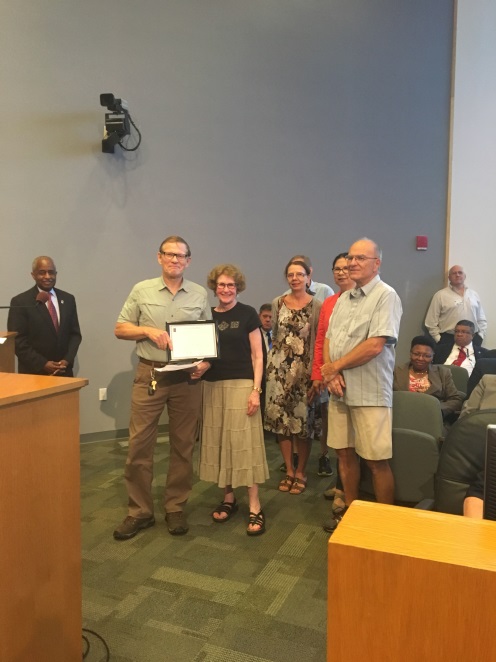 Congratulations to John Goebel on being recognized as the June 2017 Neighbor Spotlight for the City of Durham.  Thirty-one years ago, John Goebel and his wife Rita moved to Durham where he would begin teaching at the NC School of Math and Science. Not long after they’d been in Durham, John received a flyer in the mail to join Rails to Trails Conservancy.  At the first state meeting he attended, he became president of the Triangle Rails to Trails Conservancy where he oversaw the first master plan for the American Tobacco Trail.

In this time, the Goebels moved to a townhome in Colony Hill- now their home of 28 years. The townhouse has a small yard, but he considers Sandy Creek “kind of my backyard.”  At the time, Sandy Creek Park, the site of one of Durham’s old sewage treatment plants was in rough shape. It was dirty, frequently vandalized. The trails were basically nonexistent. Few people knew about it, and those who did knew it wasn’t safe.

When the New Hope Corridor Advisory Committee heard that the City was getting ready to sell the property (which Goebel explains is the same size as the Vatican City), he knew he had to act. “If we waited, it might have been a car dealership,” Goebel explains.  With a grant from the NC State Parks, he and dozens of volunteers started by repairing the bridge over Sandy Creek. With a small grant and a lot of volunteer labor, Goebel repaired the bridge over Sandy Creek for about $3000- a project originally estimated to cost $60,000. Since then he’s received many more grants and led many more projects (created a wildlife blind, planted native plants).

He enjoys the opportunity to build and design. His latest project is a 200 foot boardwalk, which will increase access to Sandy Creek Park from Garrett Road and surrounding neighborhoods.  Goebel has overseen countless volunteers. He estimated more than 3000 volunteers hours have been put into Sandy Creek – nearly half from Duke student groups, such as the BUILD program. Volunteers also came from Durham Academy and the School of Math and Science, the Sierra and Audubon clubs, and local neighborhoods. He spends an average of ten hours per week- pulling weeds or planning and preparing for the next volunteer project.

After a morning of observing Monarch caterpillars, chrysalides and emerging butterflies with his fellow sextigenarean friends, he started the Monarch festival. In the first year, over 500 people attended, including the Mexican consulate.

According to his nomination for the Neighbor Spotlight, “John has worked tirelessly (and continues to do so) to improve access and increase use of Sandy Creek Park, our local environmental city park…He has done so many things for the park that it is hard to list them all.”  His neighbors are grateful for all his Sandy Creek Park work- which has created a safer, more connected, and more livable park. He’s proud of transforming a space that was not being cared for and not being used.

In addition to Sandy Creek, Goebel is also involved with the Durham Parks Foundation, the Durham Open Space and Trails Commission, the New Hope Creek Advisory Board and Keep Durham Beautiful.

His dream for the Durham community is first class parks, available to everyone, all connected by trails. He works for smart community growth and to keep the parks preserved.

His advice to others:

Keep up with events at Friends of Sandy Creek on their Facebook page. Once the building permit is approved for his latest challenge, a 200 foot boardwalk, he’s looking for people with building skills.