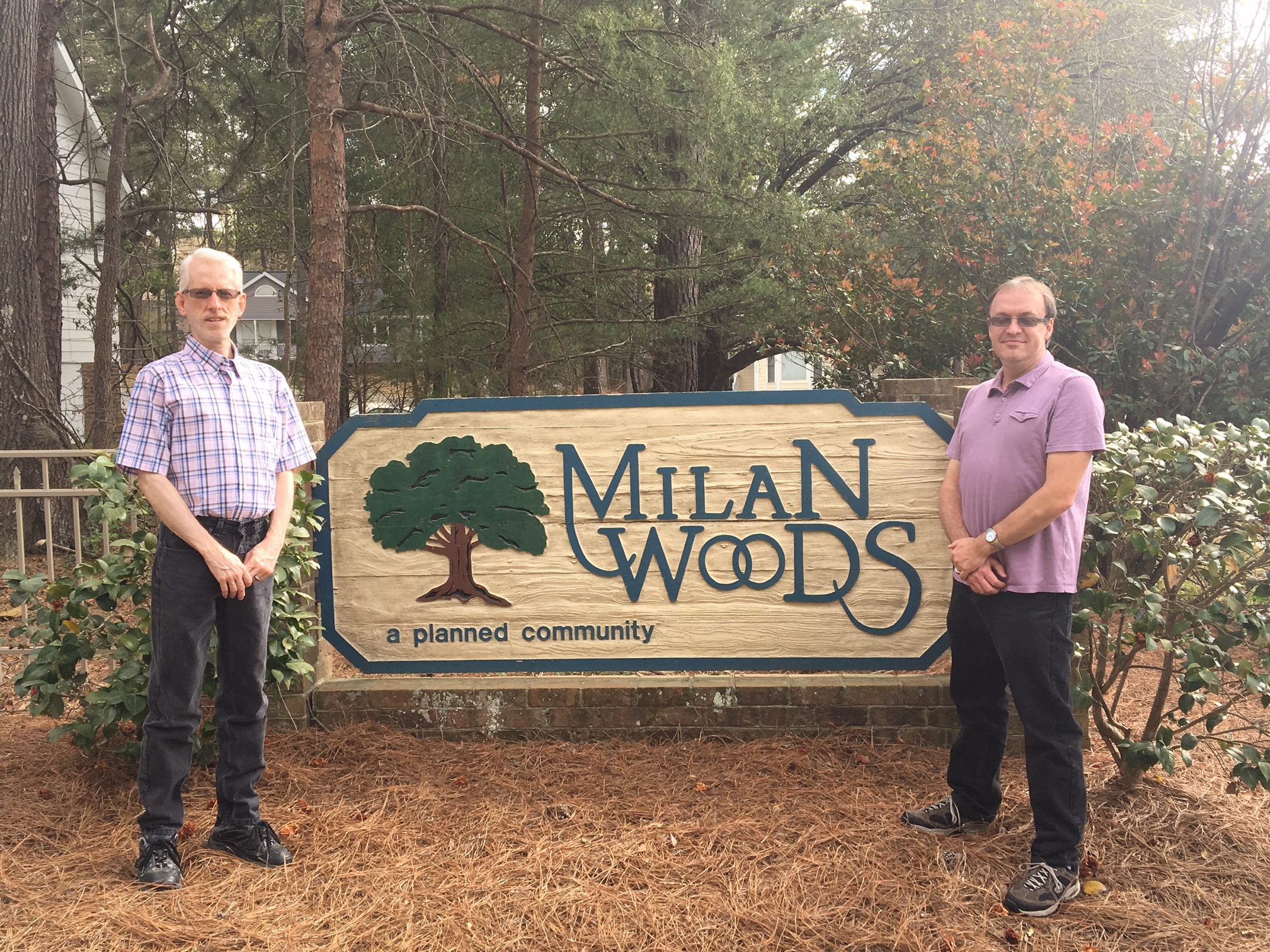 What is the name of your neighborhood?

We have lived in Milan Woods for almost 22 years.

Tell us about your neighborhood.

The Milan Woods community was built between 1988 and 1994. The neighborhood is located off of Geer Street, behind the Northeast Hills community. We have 243 homes and a Homeowners Association (HOA) Board and management company that takes care of the neighborhood-related responsibilities. Our location has proven to be ideal since we are off the beaten path but still accessible to all major thoroughfares. The area feels a little more like it is out in the country since we are generally very quiet.

What successes have your neighborhood and community had?

Our involvement initially started back in 1995, a few months after we moved into the community. We were approached by a HOA board member to help with the neighborhood watch program. Rob quickly became the neighborhood watch coordinator with Steve assisting him. After several re-starts, we finally got it fully established and worked towards building a relationship with and between our neighbors. Steve also joined the HOA board in 2006 since it was felt that a direct relationship between the homeowner’s association and our neighborhood watch could help improve both. He has been HOA President since 2007.

Under Steve’s HOA leadership, there was a more proactive stance towards violations of the Milan Woods Covenants and Architectural Guidelines, since run-down conditions in a neighborhood could lead to increased crime. We also worked with several City departments, including Neighborhood Improvement Services, Transportation, Planning/Zoning, and Storm Water, to address infrastructure problems and to address City code violations.

The HOA started sponsoring annual neighborhood events to bring the community together, which we planned and organized. Initially we held neighborhood festivals where we brought together City departments with our residents. Rob put a lot of effort into developing contacts with various City departments so that we could have as much information as possible about what they do available to our residents. We also put a lot of effort into encouraging neighbors to get to know each other, as a stronger sense of community would ultimately lead to a safer neighborhood. We have also been participating in National Night Out for close to 10 years.

Development of our relationship with the Durham Police Department (DPD) has been our greatest success. A former PAC 1 Crime Prevention Officer, Reese Carson, and Captain, Winslow Forbes, created a more formal relationship between the Milan Woods neighborhood watch and the DPD. They worked with us to strengthen our neighborhood watch and to develop a better relationship with the Police. We have since taken the information they have provided and passed that along to our residents, to encourage them to actually call 911 when there are problems and to work with Police if they witness a crime. Using the City Manager’s report email that is provided each Friday, Rob sends out weekly emails to the residents to keep them informed of crime statistics for our area, plus anything notable from other parts of the City. We are also both Leads on our Nextdoor site, which was established in January 2016 and already has almost 70% of residents signed up.

On the HOA front, a lot of effort has been put into keeping our neighborhood looking nice and making it a place people want to live. Now that the housing market has recovered, we have seen any homes for sale move pretty quickly from listing to being under contract. The HOA finances have also been tightened up, such that we have kept our dues unchanged for years, better managing the money we have to be able to keep the neighborhood maintained without increasing dues. We also provide a Welcome Packet with small gift to new homeowners, so that they can learn about the neighborhood and its neighborhood watch program soon after moving into their new home. That has helped greatly with engaging with the new residents.

Rob has been working with the HOA management company for years on issues that cover both neighborhood watch and HOA issues. He recently was given a honorary role on the board in the role of Historian given his expansive knowledge of the people and issues within the neighborhood. His insights and experiences dealing with our residents has helped resolve issues that would have been more difficult for the management company alone.

Based on the improved communication between our residents and Police, and our residents more readily participating with the neighborhood watch program, we feel that our neighborhood has kept its crime lower than the surrounding area. Active involvement of residents is key to keeping a community safe and secure.

What are some concerns that you still have in your neighborhood?

From a neighborhood perspective, most of our issues are in a maintenance mode. We continually address property maintenance in order to keep the neighborhood looking nice and, as always, continue to remind our residents about the importance of being vigilant in watching out for their own property as well as that of their neighbors.

The major concern we are currently dealing with is actually outside of the community. There is a re-zoning case coming up, where Durham County wants to re-zone 40+ acres down the street from our house from Rural Residential to Light Industrial. Given the lack of information available at the time of this interview, we have many concerns about the safety of our residents, our quality of life, and property values. We are working together with Northeast Hills, Landon Farms, and Junction Road to present a unified front when addressing this re-zoning request. Whether we ultimately support or fight the re-zoning will depend on negotiations with the developer and the County. Either way, we will be there representing our residents.

What advice would you give to other community members?

Our advice would be to take an interest in your community and get involved. Attend your local PAC (Partner’s Against Crime) meetings.  Since we began attending, we have received so much pertinent information and have had the ability to network with so many people and city staff to improve our ability to impact our neighborhood.  We have had many people tell us that they would love to get involved but they are busy. We have a life to lead also and still manage to do what we can when it is needed. Involvement in your community can be very rewarding so please participate by getting to know your neighbors, participate in community events, and look into joining the HOA board to learn more about what we do as a neighborhood.

Do you have any upcoming opportunities for other people to get involved?

The primary opportunity to get involved would be to help as needed in the upcoming re-zoning fight. We will need residents to show up at meetings, some to speak, and make their presence known, once we are to the point of having formal meetings with the Planning Commission and City Council. On the HOA front, we will have a few seats come up for election on the HOA board this fall and would like to make sure we keep them filled, so we encourage anyone that might be interested to come to the annual meeting in November to see what we do and consider running for a seat on the board.